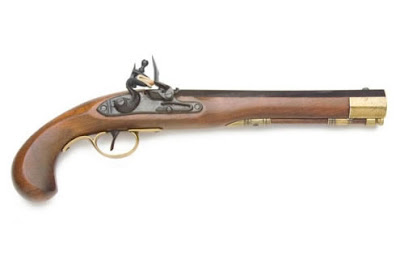 Here is a question that I think has merit for consideration, and I hope you serious shooters don't get all puffy-faced.

I wonder if we have lost a step from the men who fought in RevWarI partly because of the simple facts of life they faced every day.

Life was harder and more dangerous. The number of calories one needed to expend (most people) just to consume enough calories to stay healthy was real work.

If you were injured or got sick, good luck to you.

And now the point of this piece: The pistol or rifle carried was a single shot weapon that, by today's standards, took a lifetime to reload. It wasn't accurate (again, by today's standards). Before you flintlock guys rip me a new one, yes, I do know what a skilled man can do with a Kentucky or Pennsylvania rifle, and if one was pointed at me, I'd find cover, and I would not worry about looking cool as I did it!

If you had beef and drew your weapon in RevWarI days, you needed to be a better shot than today, in a world where you can empty a magazine in seconds and reload even faster. In RevWarI days your second shot was probably often a knife or tomahawk attack, rather than reloading that beautifully crafted Kentucky.

My uncle taught me to shoot. (His brothers and cousins and friends were often around, adding to my experiences). He had me double-tapping pie plates with his .45 from Viet Nam. But he also made me learn to use a Walker. He'd often send me hunting muskrats with a single-shot .22 or a Ruger .22 single action (I loved that revolver!) And he also loved the ability of dumping 20 rounds from his Mini-14 into a spot on a cliff across the marsh as fast as he could pull the trigger. And he made me learn to shoot a bow. He made me learn to throw a knife. (I still suck at it if I throw at any range beyond about 6 feet, in case you are planning your tactics against me. ;)

The point: He made me cover a wide range of disciplines. He preached aimed fire when you only had one shot and your dinner depended on making it count. He also knew there was a place and time for laying down a wall of lead.

Look at your personal shooting skillset. Do you rely too much on the ability to pull the trigger a second time? In a real fight, your Bad Guy might be on you before you get a chance to put the front sight back where you need it.