Sighted while traveling in Virginia... 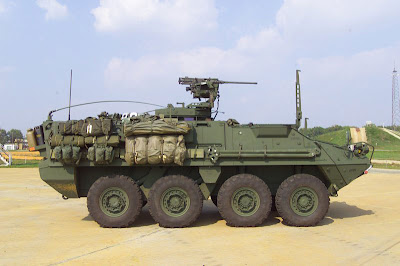 From LT at NCRenegade: I concur that it is coming soon - driving down I-95 this weekend (7/14), I saw over a dozen Stryker vehicles, guns mounted, standing overwatch on the highway in Virginia...six were positioned in echelon on the grass at a Weigh-station, several in the median about 10 miles further south, and one on the exit ramp where we stopped to get gas. They all had their .50s racked and pointed at the road. This is totally unprecedented.

(When I was active, we were always required to stow our guns before leaving post...no armaments visible on public roadways, EVER.)

This is but the latest case where the military is being deployed on US soil as a precursory PSYOP - they are de-sensitizing the public to the sight of widespread military force, big time.

Anyone else seeing this sort of thing?