The Wisdom of Concerned American 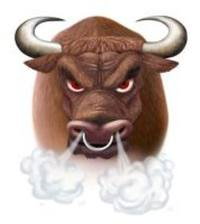 I've called this online community a circle-jerk on more than one occasion, and I am not saying I haven't had my pud in my hand a few times, too. 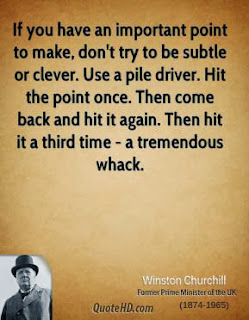 CA made a point the other day that got lost in the noise, and I'd like to do a Churchill so it flippin' sticks:

If you have an important point to make, don't try to be subtle or clever. Use a pile driver. Hit the point once. Then come back and hit it again. Then hit it a third time - a tremendous whack.

A lot of writers and commenters, professional and amateurs, invest a lot of time discussing how many Angels fit upon the head of a pin on every topic, sub-topic, categories of sub-sub-topics, ad infinitum, relating to the way America is, should be, and will be.

The point CA made rather simply was: Let's win, first.

May I hear an Amen?

For those of you who claim some sort of paralysis because, without some framework or roadmap in place, we can surely never get from here to there, try this roadmap - it was in effect on the day I was born, and it has NOT been revoked:  This is America.  When I was born, my father, his brothers, their fathers, and on back, all had blood on their hands and said "Boy, this is your country, from sea to sea and coast to coast, and wherever you want to go in this country, you go, because we have spilled blood - some of ours, some not ours - to make sure you can go anywhere you want with the Rights of an American unquestioned by any man."

I may be paraphrasing a bit - it was long ago and it was probably awkward, what with afterbirth and messiness everywhere.  Also, I hadn't learned English yet.  But don't get hung up on details.

That is the standard I intend to follow until someone kills me.  This is my country, paid for with the blood of better men than I, and they did NOT do what they did so that my Constitutional Rights could end at the borders of New York or California - even if some of my fellow Countrymen decide they are willing to barter those "Rights" away for me.  They do NOT have that authority.  No man on this continent has the authority to barter away ANY of my Natural Rights on this soil.  Period.  Such a man who tries is as much an enemy as the man claiming I have lost said Rights.  He'd better shoot me in the back or the face rather than try and convince me I should yield.

But, let's circle back to CA's suggestion that we win the fight before we start fussin' over details.

See the bull at the top of the post?  Right now he's looking at you and your lasso thinking something along the lines of "Funny, I don't feel like I'm dinner just yet..."

The bull always has a vote.

You may want to kill the bull and start slaughtering him up before pulling spices out of the cupboard... 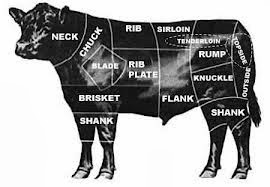