The Cold War never ended - it's our job to kill the Commies...

**This matters, folks.  This post was written just 2 years ago (January) and suddenly a 'National Socialist' pops up.  Consider the timing.  Consider the last 4 months since PatCon.  Understand that THERE ARE PROVOCATEURS AND ENEMIES OF LIBERTY trying to impede the work we do. Read the new comments.  Understand that WWIII is HERE and you and I are THE FRONT LINES!  I STRONGLY recommend you reconsider EVERYTHING you think you know about the 'Liberty Movement' and who is, and IS NOT, sincere about promoting true liberty.

J. Edgar Hoover was hunting Communists in 1924 when he was named Director of the Bureau of Investigation, the predecessor of the FBI.

Later in the 50's Senator Joe McCarthy was hunting Communists who had worked their way into FedGov, and the problem he ran into was that he was outnumbered.  There were so many Communists embedded in FedGov and elsewhere they were able to shout him down.  He died at just 48 years of age, censured and despised.

Yet when the Soviet Union "fell", KGB archives identified 221 Communists who had jobs in the Hoover Administration in 1931!!!  So you can imagine how many were in place in the '50's.

Anatoliy Golitsyn defected in December 1961 and informed the CIA that US FedGov was thoroughly penetrated, there was a very highly placed mole in US Intel code named Sasha working for the Soviets, and that the US was on the wrong end of a very sophisticated, long-term deception that was an existential threat to the USA.  The CIA's best counter-intelligence asset, James Jesus Angleton, perhaps one of the best ever, debriefed Golitsyn and certified his bona fides.  Yet Golitsyn was correct - the Soviets even then owned the highest levels of USG.  Golitsyn was deemed a fraud and Angleton was smeared to the point that his credibility was reduced to nothing. 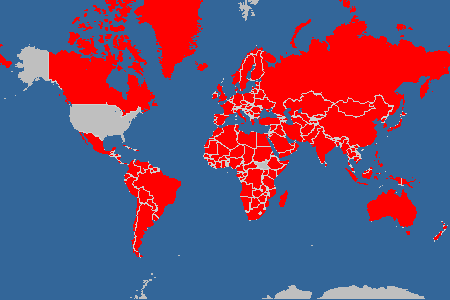 Fifty years later, look at where we stand today.  "Communism" owns the planet today and they are about to close the deal on the last piece of real estate on planet Earth that has a chance of rolling back the Red Tide - America.  You can't point to a country on that map that doesn't deserve to be Commie Red.  Every country is either communist, socialist, run by a tyranny of some sort, be it religious or otherwise, and the governments of those countries are officially anti-individual-Liberty.  Test the theory - go to any country about which you think I am wrong, put an open-carry pistol on your hip, a few grenades hanging across your chest, a select-fire rifle across your back, then begin denouncing the reigning government.  If you can do this without the government taking action against you, I will stand corrected.

Why are America and Israel the only 2 countries I did not code red?  Because I wasn't offered a dark pink, which more accurately describes both.  Israel is a bit on the socialist side of things - I'd like to see how they would evolve if they were not constantly on the verge of obliteration.  Of course America should be Commie Red by my own standard - I'm stubborn.  I still think we have enough people and enough grit to roll back the Red.  We shall see.

You and I have a simple, albeit monumental, task before us, Patriots.  It is up to you and me to do what Jefferson failed to do to the Federalists, what Hoover and McCarthy failed to do to Commie moles in USG, What Truman refused to do when Patton wanted to go from Berlin to Moscow.

America is infested with Commie garbage and those who support Commie garbage.  They are facilitated even more by the rotten masses that have grown up in recent generations of moral decay orchestrated by the Commies among us.

Are you up to the challenge?

A bloodbath is coming to America not only in our lifetime, but I will dare say by November 2016, at the latest.  Communists have proven many times they have no problem killing tens-of-millions of people.  They mean to kill you to turn the last piece of planet Earth Commie Red with your blood, or your disease, or your famine.

Or we get them first.

They mean to have a genocide based on political ideology.

I have no problem doing the same to them, firstest and mostest.  Communism and all of the variable flavors associated with it under this umbrella of tyranny is Evil.  Supporters of tyranny are Evil.  Stupid people who are too lazy and/or stupid to know what they are doing are too stupid to remain among us.  Making Evil leave the country is not a moral crime.  If Evil people (or the unredeemably stupid) refuse to leave, there is no sin involved in making them leave, by force.  Killing Evil is no moral sin if you have tried reason and non-lethal means of self defense.

Doing nothing, or making excuses that leave Commies or terminally stupid people among us to breed and further their intent to destroy Liberty, is a moral crime, as far as I am concerned.

I have met several hundred Patriots face-to-face and a few thousand more here online.  I know you and I can get it done.  We can personally save Liberty.  It won't take many of us if we are willing to go harder than our enemies.

When the Enemies of Liberty abandon pretense and decide to go hard, they will do so without losing any sleep.  They will congratulate one another the next day.  They are convinced they are making humanity better by ridding the species of defects who like Guns and God.

You must be ready and able to go harder - first.

But if you can't even get your head around the truth of the Evil that we face, it's already over.