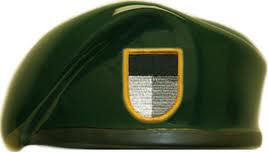 We've got SF vets here in our community, who are goldmines of information for we accountants, plumbers, automobile mechanics, yacht captains and others who self-identify as III Patriots, and who believe we will soon be called upon by our Principles to stand tall in the role of the Militiaman for Liberty.

Most of you are probably aware of the SF Mission and Training, and I hope our SF Patriots will pick up on this post and correct anything I get wrong, or expand where it is needed.  I am including Max V and Matt Bracken in this as they have highly advanced training that, while not precisely fitted to the US Army SF Mission, at least overlaps in many areas, and in other areas rises to a level that SF does not.

The US Army Special Forces, the Green Berets (one of the highest personal achievements known to Mankind, if you ask me) are the ONLY unit deliberately tasked with Unconventional Warfare (UW) as its primary reason to exist.  It is a noble Profession and invaluable skillset in a world where Liberty is threatened.

The point of this post is my recommendation that all FreeFor units out there, whether formal militia or if you and your people simply identify as Tribe, consider setting up your Team based on the traditional SF Model.  The traditional SF Model has been in place for a long time, because it works.  SF is the only known unit that has as a primary Mission the role of going deep behind enemy lines to connect with indigenous populations who are favorably aligned to US goals, and tasked to live among them, help train them into a more efficient and proficient fighting force.  Our SF Warriors are, in themselves, true Guerrilla Fighters, and their job is to train and lead farmers and blacksmiths and accountants to fight as Guerrillas.  You and I will probably never earn the coveted Green Beret, but we can earn the proud title of Guerrilla Liberty Fighter.

In my mis-spent youth I hired several former SF men in the DC area to train me on some of the basics.  (Soldier of Fortune at that time still allowed classified ads for Mercenaries).  I learned to rock-climb and rappel from such a man.  I learned much from such men.

Whether you accept it or not, the North American Liberty Games will pivot toward success or defeat based upon 2 primary factors: The success of American Guerrilla Liberty Fighters, and the success of Americans who are willing to do the Hardest Things, the tasks that cannot be tracked back to the Guerrillas, Militias, Tribes - tasks that may send the practitioner to Hell.  So be it.

The typical SF Unit is comprised of 12 Warriors.  Commander, #2, Ops sergeant, 1 Asst Ops Sergeant tasked with Intelligence Ops, 2 Weapons Sergeants, 2 Comms Sergeants, 2 Medical Sergeants and 2 engineering Sergeants.  If needed, the team can be divided into separate operating cells of 6 each.

Here's a good summary, the link is here and has more details:

ODAs are made up of 12 men, each with a separate Military Occupational Specialty (MOS). Each ODA member is cross-trained in other specialties. A typical 12-man ODA comprises: 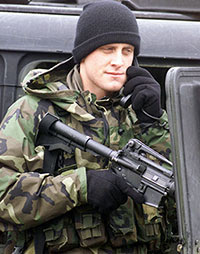 I would personally recommend that each of you who are the Leaders of your militia units, your Tribes, your neighborhood Committee of Safety - whatever - build your units along this Model.  Needless to say, cross-train your people as much as possible.  If your Medic needs to take over for your Comms guy, he needs to make it happen.  If your Weapons guy needs to dive into a chest for a bullet and sew leaking critical body parts, he needs to do it.

You and your guys will never be equal to an active duty SF Team.  That is NOT the yardstick to be used, anyway.  When Mosby or Max or Dan Morgan or Sparks show up and assess your Team, impress them as much as possible not by staging a good inspection - but by being a good, well-rounded, dedicated Team.

If you are lucky enough to have enough manpower to build 2 or more Teams, do it!  Consider a rank system if you think it will help morale and cohesion in your unit.  Forge the Mission around the goal of Liberty.  Get into specialty training (as does SF for some Teams) such as, SCUBA if you live in an AO where SCUBA may be needed, piloting aircraft, et cetera.

My point is this: You have decided that some form of methodical, savage violence will be required if you are to have a chance at survival, and if Liberty is to have that same chance.  Use a unit Model that works, that has proven itself.  It is military in flavor (even if implemented by mere Militiamen), so run it in a military fashion.  Personally, I think rank is a motivator in such circumstances, as are medals and tabs that recognize Members for specific tasks or qualifications.

The SF basic Model covers all of the militarily fundamentals.  It can work for you.

Let's not re-invent the wheel, there is no need.  By the same token, the concept of Leaderless Resistance is a wonderful concept - as long as it is kept within suitable constraints.  If you are the boss, you make the calls, and they had better f'n be followed.  If your Team doesn't like you as Commander - respect their wishes and step aside.  You can stay within the unit where you fit, or you may leave - but fighting within units is a fundamental and absolute FAIL.

Personally, I would NOT allow any of your Team to wear any SF/SEAL/Para-Rescue/Recon, badges/pins/shirts, et cetera, from any of our military units.  You did not earn those identifiers.  If you do choose to add rank to your unit, I see no problem using traditional rank insignia.

Read the article, here.  I also linked the wiki page.